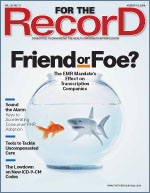 Skin is designed to be supple and smooth, and organs work best when there is no restriction or fibrosis. When the skin becomes taut and hard, it can be painful and limit function. When organs suffer fibrosis, they can fail.

Scleroderma, a rare autoimmune disease characterized by abnormal connective tissue growth, can wreak havoc on everything from the skin and heart to lungs, teeth, speech, and movement. The overproduction of collagen causes the skin and organs to harden, leading them to atrophy and possibly fail. There are approximately 300,000 reported cases of scleroderma in the United States, according to the National Institutes of Health (NIH).

Scleroderma, which literally means “hard skin,” is a progressive connective tissue disorder that can be fatal. “The skin and organs in the body have a support matrix of collagen and other extracellular proteins. An overproduction of collagen and similar proteins leads to a thickening of the skin, which can leave the skin hard and dry. If this thickening affects the lungs, they can no longer function,” explains Carol Feghali-Bostwick, PhD, an assistant professor of medicine in the division of pulmonary, allergy, and critical care medicine at the Simmons Center for Interstitial Lung Disease at the University of Pittsburgh and vice chair of the board of directors of the Scleroderma Foundation.

There are two types of scleroderma: systemic and localized. Systemic scleroderma is more serious and includes diagnoses of diffuse and limited cutaneous forms. It is more common in adults, presenting between the ages of 20 and 50, and approximately four times more common in women. “For women, this is right in their childbearing years, and there is a theory that hormones may play a role in the susceptibility to scleroderma. But this is an area where further research is necessary,” says Feghali-Bostwick.

Localized scleroderma tends to be less severe. Its forms, including morphea and linear diagnoses, are more common in children and rarely progress to the systemic stage in adulthood, says Feghali-Bostwick. For both types, the disease’s progression and symptoms vary widely from person to person, making a diagnosis difficult with no set treatment protocol.

There is currently no cure for scleroderma, and the best hope for patients is early diagnosis, which can be difficult. “Misdiagnosis is very common with scleroderma patients because its symptoms are quite common. But as the disease progresses, it becomes evident that it is scleroderma, and the best treatments may not be successful in those with advanced disease,” says John Varga, MD, the Hughes Distinguished Professor of Rheumatology at the Feinberg School of Medicine at Chicago’s Northwestern University.

Like many other diseases, timing is essential. “Although scleroderma is not a cancer, it behaves a lot like cancer in that time is a significant factor in determining how a patient will fare with the disease,” says Varga.

Localized scleroderma, as its name suggests, targets a particular part of the body, mostly limited to the skin (morphea) and the bones and muscles beneath it (linear). A thickened patch of skin due to excessive collagen deposits, which can affect the dermis and/or the subcutaneous tissues, characterizes morphea. The patches are generally oval in appearance and seen mostly on the lower half of the body.

Linear scleroderma is a line of tight skin generally seen on the face and limbs. However, unlike morphea, linear affects the bones and muscles beneath it, which can limit function and affect limb growth.

Getting a handle on localized scleroderma consists of treating the symptoms as they appear. Because scleroderma is highly individualized and there have been no large-scale studies to support a particular treatment in children, there is no singular course of treatment.

Patients diagnosed with advanced systemic disease have a prognosis of anywhere from three to 15 years or more depending on the severity of the complications involving the lungs or another internal organ. In patients with diffuse systemic disease, the progression can be very quick, but in those patients where the disease is caught early enough, it can be managed accordingly and, with an effective symptom management plan, some patients can enjoy a typical life expectancy, explains Feghali-Bostwick.

Diagnosing systemic scleroderma is difficult because of the overlap in symptoms found in more common ailments, including gastrointestinal (GI) reflux disease, GI discomforts such as diarrhea and/or constipation, arthritis, carpal tunnel syndrome, stiffness and pain in joints and tendons, shortness of breath, kidney problems, pulmonary fibrosis, pulmonary hypertension, and Sjögren’s syndrome (a chronic disease in which white blood cells attack moisture-producing glands in the body).

However, one of the most common and somewhat telling signs of systemic scleroderma is Raynaud’s phenomenon, a condition in which the fingers or toes change color due to the narrowing of blood vessels in the hands and feet. “The hand color can be biphasic or triphasic, and the hands become very cold. Other parts of the body that are exposed to the cold can experience Raynaud’s phenomenon such as the feet and nose,” says Feghali-Bostwick.

The first and most important step to determine if a patient has scleroderma is by performing a thorough physical, including a skin examination to determine its elasticity. “In using a skin scoring system, the physician pinches various parts of the patient’s body to test for thickness. The less skin that can be pinched equals a higher score in diagnosing scleroderma,” says Feghali-Bostwick.

In addition to the physical exam, certain tests can be ordered to determine how much the internal organs have been affected and if the patient has any of the antibodies associated with scleroderma. “Currently, there are nine antibodies common to scleroderma that we can test for,” says Feghali-Bostwick. Other tests include skin biopsy, chest x-ray, high-resolution CT scan, pulmonary function tests, and a study of body inflammation.

Despite all this probing and prodding, diagnosing scleroderma is no easy task. “It is very common for a lot of patients to go through a number of diagnoses such as lupus and carpal tunnel syndrome before it becomes evident that they have scleroderma because of internal organ involvement. For these patients, success is limited,” says Varga.

With no cure on the horizon, physicians can only manage scleroderma’s symptoms. Nonsteroidal anti-inflammatory drugs are the first line of defense, while other medications may be added for specific symptoms. These medications can include antacids and drugs to manage blood pressure, kidney problems, Raynaud’s phenomenon, and difficult breathing.

For patients with severe pulmonary fibrosis, a lung transplant may be the best treatment. “A large number of the lung transplants have been done for scleroderma patients. However, we only have, at best, a 10- to 15-year history on these patients,” says Feghali-Bostwick. Most deaths following a transplant are due to transplant complications. Meanwhile, to date, patients who survive do not seem to have any symptoms return to the transplanted lung, she adds.

Scleroderma is not a cancer, nor is it contagious. “It is likely a multigenic disease with environmental components serving as triggers,” explains Feghali-Bostwick. Some studies have suggested there is an increased risk of developing the disease if a first-degree relative has been afflicted. However, other research disputes that theory. “Studies looking at identical twins have found that it is not common for both twins who inherit the same genetic background to develop scleroderma,” she says.

One environmental factor that appears to influence the development of the disease and trigger its development in genetically susceptible patients is trichlorethylene, a colorless, poisonous liquid used as an industrial solvent. “People who are exposed to trichloroethylene, such as dry cleaners, are at an increased risk of developing sclerodermalike disease. … There are several other triggers of sclerodermalike disease. For example, patients who receive the chemotherapy drug bleomycin can develop lung fibrosis similar to that seen in scleroderma patients,” says Feghali-Bostwick.

There are about a half-dozen other new agents set to start clinical trials in the near future. “This is pretty remarkable considering that only a few years ago there was nothing in the pipeline for scleroderma,” says Varga, who adds that the lack of scleroderma research is directly tied to inadequate funding. Currently, there are only 12 centers across the country studying the disease, he says.

As researchers and physicians learn more about scleroderma, including its cause and who is susceptible to it outside of environmental factors, a cure could be realized. But Varga cautions that it’s a long way off. “It is our hope right now to find medications that can help put advanced diffuse scleroderma into remission or possibly slow down its progression,” he says.

— Kim M. Norton is a New Jersey-based freelance writer specializing in healthcare-related topics for various trade and consumer publications. She can be contacted at kim_norton1@hotmail.com.

Systemic scleroderma affects a person’s skin and internal organs due to the overproduction of collagen. Excess collagen causes connective tissues to harden, internal organs to constrict, and the skin to harden and become dry and itchy. Although there is no cure for systemic scleroderma, its symptoms can be managed with medication. The following table, using information from the Scleroderma Foundation, outlines various options.