Survey: EHRs Have Taken Over, Except for Hearts and Minds

EHR systems used to be considered a bandwagon that physicians would jump on in the hope that digital technology would improve patient care and maybe even streamline their work.

Medscape EHR Report 2016 shows that the overwhelming majority of physicians are now on the bandwagon, except that it now resembles a police department's paddy wagon. Most of the people inside aren't happy to be there.

Ninety-one percent of physicians told Medscape they use some sort of EHR, up from 74% in 2012. And 56% of these users said the technology has improved the documentation of patient care.

Medscape put the productivity question to EHR users another way—how does the software affect your workflow?—and the answers were just as disheartening. 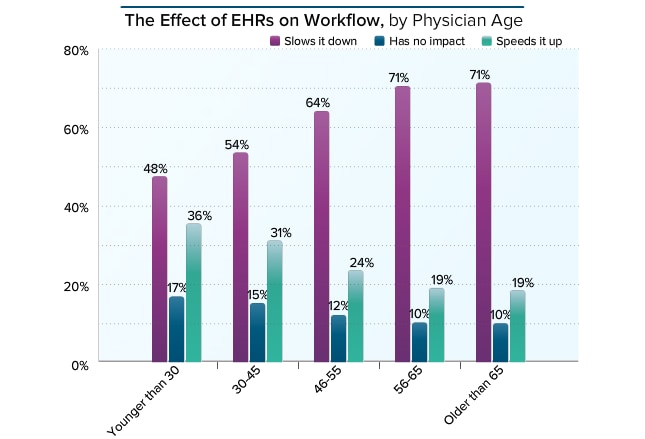 Some 15,300 physicians across 25 specialties completed the survey online between June 6 and August 8. Thirty-seven percent were under 46 years of age, and 58% were men.

Epic Dominance
The survey results also demonstrated the continuing dominance of EHR technology from Epic, a company that caters to hospitals and large health systems and their cadres of employed physicians. As in Medscape's 2012 survey, Epic's software topped the list of the most widely used EHRs, with use by 28% of digital doctors compared with 22% four years ago. Among physicians who work for hospitals and health systems, Epic enjoys an industry-leading 41% market share.

Even though physicians often don't have any choice in the system they use, especially if they're employed, Epic users nevertheless gave their software high marks. It ranked second in an overall rating (3.45 on a 5-point scale) based on individual scores for ease of use, vendor support, overall satisfaction, connectivity, and usefulness as a clinical tool.

The VA Computerized Patient Record System, the user interface for the VA's VistA system, was rated number 1 at 3.65. The VA is considering giving up VistA, a home-grown, public domain program available from the government or distributors, for a commercial EHR.

Copying and Pasting Is Common
EHRs typically give physicians the ability to copy and paste comments from previous patient visits—think history and physical exam—into the note for the latest one. This software function, a staple in word processing, allows physicians to write a note faster, but Health and Human Services suspects it's also served as a tool for fraud.

The feds worry that no one edits "cloned" patient information to ensure that it's accurate and up to date and that many physicians bill for higher levels of evaluation and management services than warranted by inserting dense blocks of old patient information into a new note.

Copying and pasting is a widespread EHR behavior, according to Medscape's EHR survey for 2016. Eleven percent of EHR users said they always do it, while 31% said they do it often. Another 24% are occasional cloners. The rest do it rarely (18%) or not at all (17%).